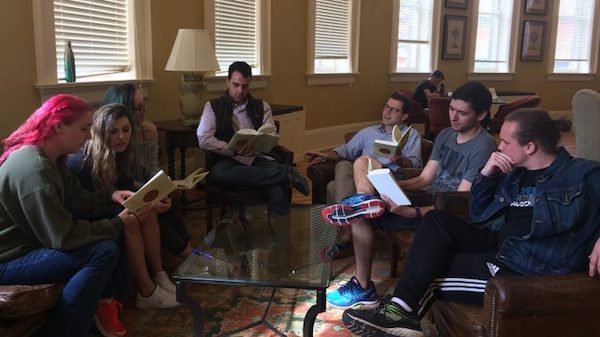 Neil A. Manson, University of Mississippi professor of philosophy, has established a reading group on the works of Alvin Plantinga, one of the world’s most influential philosophers of religion. Photo courtesy of Neil A. Manson

Neil A. Manson, University of Mississippi professor of philosophy, has used a grant from the Society of Christian Philosophers to establish a reading group on the works of one of the world’s most influential philosophers of religion.

In 2017, Alvin Plantinga, professor emeritus at Calvin College, won the prestigious Templeton Prize, which came with a $1.4 million award. Past winners of the prize, which honors a living person who has made an exceptional contribution to affirming life’s spiritual dimension, include Mother Teresa, Archbishop Desmond Tutu and the Dalai Lama.

In honor of Plantinga’s achievement, the Society of Christian Philosophers awarded 25 colleges and universities $3,000 grants for 2017-18 for undergraduate reading groups on his works. The fund covers books, food and expenses.

Manson applied for and received one of the grants to establish an Ole Miss reading group, which convened last fall and will continue through April.

“Alvin Plantinga is perhaps the most influential living philosopher of religion,” Manson said. “The offer of a chance to read Plantinga’s works elicited a tremendous and enthusiastic response, with nearly 30 students across the University of Mississippi signing up.”

Select graduate students and other community members were allowed to participate in the group.

The group began with Plantinga’s “Warranted Christian Belief.” Manson said the book is Plantinga’s most thorough statement of the position that has come to be called “Reformed epistemology.” In October, the group also had lunch with Christopher Weaver, assistant professor of philosophy at the University of Illinois, who discussed some central objections to Plantinga’s position.

This semester, the group is reading “Where the Conflict Really Lies: Science, Religion, and Naturalism,” in which Plantinga argues, contrary to popular conceptions, that it is atheism, not theism, that is at odds with modern science.

“The Plantinga reading group has been incredibly informative, thought-provoking and fun,” said Aaron Graham, a recent graduate of the philosophy master’s program from Jackson. “We have enjoyed a guided tour of some of the principal arguments against the rationality of theistic belief, and against theistic belief’s compatibility with science.

“At each turn, Plantinga gave powerful rejoinders to those arguments.”

Manson agrees with Graham’s assessment and added that the university is fortunate to be able to have the experience with Plantinga’s works, thanks to the grant.

“Alvin Plantinga is a bold and brilliant thinker, a trenchant writer, an impeccable practitioner of analytic philosophy and one of the kindest people I have ever met,” Manson said. “He provides a model for how to address profound religious and philosophical disagreements in a civil manner. Reading his work is always enriching and enlightening.”

The reading group will conclude its work at the end of the month. Unused funds will go toward getting students additional books on related topics in the philosophy of religion, Manson said.