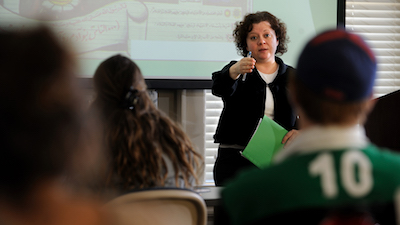 A University of Mississippi professor is opening her fall religion course to people in the Lafayette-Oxford-University community, inviting them to come learn what both the Bible and the Quran teach on several topics.

The class, REL 300: Comparative World Religions: Bible and Quran, meets from 6 to 7 p.m. Tuesdays at various religious establishments across Oxford.

The course is divided into four themes: sacred stories, ritual and performance, community and ethics, and death and afterlife. Mary Thurlkill, associate professor of religion, will discuss what both religious texts say about these topics.

This is the first time Thurlkill has opened the course to the community, but she hopes to try this format more in the future.

“It is one of our department’s main goals to encourage the academic study of religion,” Thurlkill said. “I hope such a class will appeal to a wide range of students interested in learning more about Christianity and Islam.”

She also said she wants to provide an opportunity to learn in a community setting, which she does not often get to do as a medieval historian.

“My natural habitat is a library surrounded by old, arcane texts,” she said. “What better ‘service’ to the community might we offer than an opportunity to engage in such dialogue and conversation?”

Besides Thurlkill’s lectures, the course will include videos and guest speakers.

One of those speakers in September is John Kaltner, religion professor at Rhodes College. Kaltner has published several books on introducing the Quran to readers more familiar with the Bible and will present some of his work about what the texts say about Moses, Abraham, Jesus and other notable figures.

The course will follow the semester schedule for students registered through the university, but it will run 12 weeks for nonstudents.

The first and last meetings of the class will be for Ole Miss students only. However, beginning Aug. 29 through Thanksgiving break, community members can attend the course at no charge. At each meeting, a reception from 5:30 to 6 p.m. will serve as a break for students and an opportunity for fellowship for all participants.

“Community engagement plays an important part in our university’s mission,” said Steven Skultety, associate professor and chair of the Department of Philosophy and Religion. “Professor Thurlkill’s innovative class serves as a wonderful example of how faculty in higher education can better serve the citizens of our city and state.”

UM students will complete scholarly readings and assignments as well as design and host an “Interreligious Dialogue Conference” in November, which also will feature guest speakers.

“I have students from a wide range of majors already registered for the class, and I’ve tried to tailor the course a bit to their various skill sets,” she said. “For example, some students will be responsible for marketing and advertising the conference while others will document the sessions and provide podcasts for community groups.”

Space is limited at some of the venues, so community members interested in taking the course should register by contacting Thurlkill at maryt@olemiss.edu or 662-202-7536.