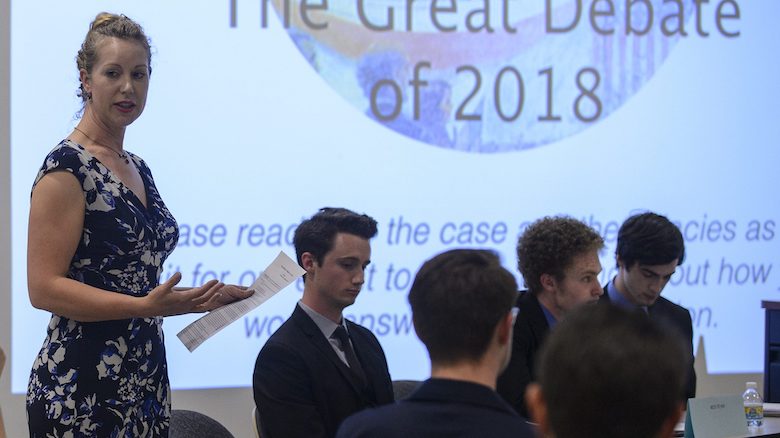 With statewide elections later this year as the backdrop, the question of whether past actions disqualify an individual from holding a position of moral leadership is the focus of a student discussion scheduled April 4 at the University of Mississippi.

The Great Debate of 2019 is being presented by the university’s Ethics Bowl Team, a student group organized last year within the Department of Philosophy and Religion. The free event begins at 5:30 p.m. in Bryant Hall, Room 209. A reception follows in the Bryant Hall rotunda.

“Given the number of high-profile scandals recently, the students chose this year’s topic to address the question of qualifications for public service,” said Deborah Mower, associate professor of philosophy. “Through the clear presentation of claims and civil dialogue, we demonstrate how to make progress on thorny ethical and political questions in our society through civil dialogue.”

During the debate, the audience will be presented a case with pertinent details, arguments and concerns on both sides of the issue, along with a copy of common fallacies made in arguments. The Ethics Bowl Team will divide into two, with each side presenting an answer to the question supported by careful arguments.

This year’s resolution question is, “Should prior actions, once discovered, disqualify an individual from holding a position of moral leadership?”

The arguments will be projected onscreen via PowerPoint to help the audience follow the intricacies of the arguments. After the debate presentation, the two teams will field questions from three guest judges who will model the civil and insightful inquiry being highlighted in the event.

Then, teams will receive questions from audience members. The teams must to clarify their initial arguments and respond to challenges by developing arguments on-the-spot.

The process of planning the debate includes brainstorming areas of interest, identifying specific possible topics, picking a topic, drafting a resolution question, researching cases, issues, factual details of current law/policy, hashing through a range of ethical issues, deciding on the most applicable normative frameworks and developing the arguments, Mower said.

“This is a very complex process and the students were very organized in working through each of these progressively week-by-week,” Mower said.

Team members decided to cover officials who are embroiled with scandals concerning actions from their past, said Dakota Warren, a senior anthropology major from Jackson.

“We really wanted to find a topic that could relate to a large majority of people, but also an issue that will only grow larger as time progresses,” said Mimi Shufelt, a junior English major from Jackson. “After discussing Virginia Gov. William Northrop’s blackface scandal, our teammate Justice Strickland proposed a case where we determine to what extent is an individual responsible for actions they may have done 20-plus years ago.”

Although the Northrop case sparked the topic, the students see the issue as affecting most professions.

“We ultimately concluded that the gravity in this sort of scandal is largely due to the positions occupied by those involved, positions which we consider to be of moral leadership,” Warren said.

After the group figured out the parameters of the discussion, team members Shufelt and Bria Mazique, a junior marketing major from New Orleans, organized meetings and made sure everyone voiced their ideas.

“We would all sit down together, talk about cases which we thought might be relevant for our topic and stage mock debates,” Warren said.

Each person on the team plays a different role in the actual debate process, so everyone must stay focused for the team to be productive.

“I know that process may not sound very fun, but discussing extremely controversial cases with a group of people who all have different viewpoints leads to some hilarious conversation,” Shufelt said.

Mazique said she hopes the public will listen and understand the arguments to the point that it moves them to feel and/or think about the subjects.

“I want the audience to be moved, whether that means they are happy or upset,” she said. “Regardless of whether they agree with the standpoints or not, my goal is for them to be able to listen to different ideas and be able to talk about them, no matter how difficult or controversial.”

Students say they joined the team because they wanted to provide a platform to demonstrate the civil behavior they believe ought to be maintained while engaging in discussions of controversial contemporary issues.

“The most important goal for this event is to demonstrate how to engage in a rigorous debate about hot-button issues, yet to do so in a way that is civil,” Mower said. “People are often surprised to think of ‘civil dialogue’ along with ‘debate’ because they associate the term ‘debate’ with heated emotion, a battle to be won, and an argumentative attitude.

“All too often, people shy away from discussing or even considering contentious issues because we – as a society – simply don’t know how to engage in reasoned, thoughtful and deeply analytical discussion about issues. The ability to engage in civil debate is a skill which has largely been lost.”

Sponsors for the Great Debate of 2019 are the Mr. and Mrs. Alfred Hume Bryant Chair of Ethics, Department of Philosophy and Religion, and SOPHIA: The Society of Philosophers in America.